“Is Chris Stedman a real person?”

My question puzzled my friend Vlad: “How do you mean?”

“I just listened to his Humanist Hour podcast. Does he mean everything he says? Because if so, then he’s the bomb.com.”

Vlad assured me of two things: 1) Chris was a real person; 2) Chris meant everything he said.

Chris Stedman. (Photo courtesy of him.)

I decided to purchase Stedman’s book, Faitheist: How an Atheist Found Common Ground with the Religious. I was not disappointed. I want to share two big ideas with you from the book:

1. Stories are powerful tools for creating empathy and humanizing others.

Stedman, a gifted writer, illustrates this point by sharing his own journey. Raised in a nonreligious household in Minnesota, he became a “born-again” Christian in middle school:

Accepting Christ into my heart felt immense. I was affirmed by the community but, incredibly, I also felt a foreign sensation — an inner warmth, like how I felt when my mom told me she was proud of me, but different, bigger. In that moment I was sure that I felt Jesus take up residence in my heart.

Soon everything came crashing down, though:

I was asking a lot of questions, and in the process I discovered two things almost simultaneously: I was queer, and my church would kick me out if they discovered my secret.

One of the book’s funnier lines shows him grappling with conservative Christian subculture and his same-sex attraction. Chris writes that he had a crush on, “the hero of the [Left Behind] series, a scrappy journalist named Buck . . . until he was portrayed by Kirk Cameron in the Left Behind movie.”

While I found this line humorous, Chris’s descent into self-hatred and shame was far from it. It was absolutely heartbreaking. At one point, he nearly committed suicide.

He came out of the closet when his mother discovered his journal, which had his deepest secrets scrawled between its covers. Chris’s mother took him to a liberal Lutheran pastor who told him that homosexuality wasn’t sinful.

Stedman was relieved but frustrated that God had let him struggle for so long by himself. Regardless, Chris got involved in Christian youth groups again. He led others and gained prominence as a queer activist in the Evangelical Lutheran Church in America. After high school, Stedman went to Augsburg College, a Lutheran institution. At the time, he thought he’d become a minister.

This plan unraveled, though, when his Christian belief faded away:

I didn’t come to the personal conclusion that God probably didn’t exist because I was angry. It wasn’t merely a reaction to the problems I saw in many religious beliefs and communities, or to the negative experiences I’d had . . . Rather, it was a conclusion I came to through intellectual and personal consideration. As I studied religion, I took a step back and reflected on the arguments for and against the existence of God, and was underwhelmed by the evidence.

I was looking forward to hearing the intellectual arguments that had persuaded Chris, but he wrote nearly nothing about them.

He did write about the irony of converting to atheism at a Christian college. He notes some very interesting experiences with his peers.

My favorite example comes from his trip to El Salvador with other Augsburg students. In the heat, Chris wore shorts that revealed a curious tattoo on his right calf: a Bible verse and stalk of wheat. One of his peers asked about the ink:

“What does it mean? What’s the verse?” my friend inquired.

“It’s Jesus speaking,” I said through gritted teeth. “It goes: ‘I tell you for certain that unless a grain of wheat falls to the ground and dies, it will remain only one grain. But if it dies, it bears much fruit.’

“Or something like that,” I added dismissively so as to seem disinterested.

This incident was funny enough, but something far more interesting happened later that day. Chris and his fellow students visited the place where archbishop Oscar Romero was assassinated. 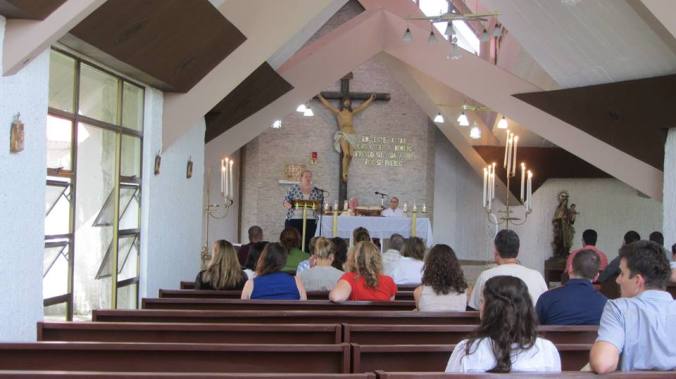 Rosaline, the tour guide, said that Romero was giving a homily when he was killed. She then read students the Bible verse that inspired the homily. Prepare yourselves:

“In the words of our Lord and Savior Jesus Christ,” she began, “‘I tell you for certain that unless a grain of wheat falls to the ground and dies, it will remain only one grain. But if it dies, it bears much fruit.’”

I shut my eyes tight and bowed my head toward the ground so as not to feel the gazes of those who had been sitting near me in the van. No [expletive] way, I thought. You’ve got to be kidding me.

Stedman wrote off the incident as mere coincidence:

[T]empting as it may be to think otherwise, I don’t believe that the universe maintains any preordained or intelligent order. My best guess is that such lucky occurrences are, well, just that. Yet as I sat in a Salvadoran church smarting with the memory of my own sardonic commentary, sentimentality washed over me. I felt such a longing to believe again . . . I don’t know why I felt I needed that episode to be intentionally orchestrated in order to cull significance from it—it was significant on its own merit.

Chris’s journey from Christianity to atheism was bumpy, and even included him drunkenly vandalizing a church sign one night. His better angels prevailed, however, and he has become a beacon of understanding and kindness in the usually choppy, murky waters of interfaith dialogue.

Over the years, I learned how to meet people in the middle or even further, and, all the more, to see people as individuals instead of members of categories I didn’t belong to. Rather than casting those who disagree with me as steadfast adversaries, I have come to see them as complex human beings and our interactions as opportunities to learn and grow together. This shift in perspective has enabled me to make peace with the struggles of my past, and the activism-by-fist of my younger years has gradually transformed into an extended arm of invitation.

I’ve shared so much of Stedman’s journey not simply because it’s fascinating and beautiful. I’ve shared so much of it because his experiences have equipped him with a special blend of empathy, humility, and patience. By listening to, and experiencing, others’ stories, he has achieved greater understanding and wisdom.

I wrote this book because I want to live in a world where love is more commonplace, and the way I’m trying to do that is by working to advance the conversation on how atheists and the religious relate to one another. Sharing my experiences is the best way I know how to do that.

Stedman gives four reasons why he thinks atheists should participate in interfaith dialogue:

Regarding the last reason, Chris laments the rise of the “New Atheists.” They have brought much attention to atheism, but, he asks, “at what cost?”

Stedman cites inflammatory figures like Dave Silverman, American Atheists President. (He’s also behind Atheist TV.) A few years ago, Silverman argued that the “Ground Zero Cross” in New York City should not be included at the 9/11 museum. 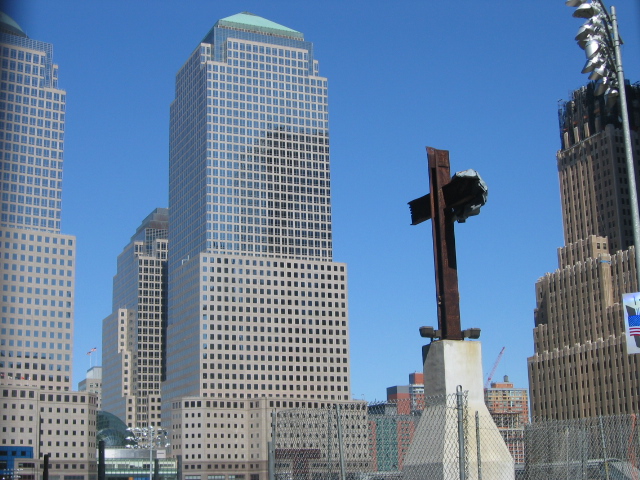 The Ground Zero Cross. (Photo by Urban, via Wikimedia commons.)

The WTC cross has become a Christian icon. It has been blessed by so-called holy men and presented as a reminder that their god, who couldn’t be bothered to stop the Muslim terrorists or prevent 3,000 people from being killed in his name, cared only enough to bestow upon us some rubble that resembles a cross.

After presenting this quotation, Jon Stewart ripped Silverman on The Daily Show for his divisive rhetoric.

Stedman notes the surprising parallels between antagonistic atheists and their extremist Christian adversaries.

In my experience, interfaith work exists to eliminate religious privilege by bringing diverse religious and nonreligious people into common work to build relationships that might deconstruct the kind of “us versus them” thinking that contributes to exclusivist religious hierarchy. It is a place to challenge and question but to do so constructively.

For Stedman, sharing stories and partnering with others serves an antiseptic function: It clears away the dirt and grime of prejudice and assumptions, enabling healthy interfaith dialogue—brain surgery with words.

(“Brain surgery with words” is a beautiful phrase from Dr. Ray Barfield.)

Is this book review glowing? Absolutely.

Do I still have some questions for Chris, though? Absolutely.

Even though he wrote so little about his intellectual journey to atheism, one passage really got me thinking:

While I love so much of what Chris is doing, I don’t find this kind of response very compelling. This response actually reminded me of a brief point Rowan Williams made about Richard Dawkins.

Asked what he would ask Dawkins, Williams notes Dawkins’s fascination with the universe’s beauty.

Does that really suggest nothing to you? . . . You’re not just describing what the universe is like, you’re in love with the universe! Well, where the blazes does that come from?

Chris’s love for life and others bleeds through his book’s pages. While his mission thrills me, I don’t think atheism can account for “love,” “justice,” and “reconciliation”—at least in any objective sense. In fact, I don’t know if atheism can avoid collapsing into materialism, and then nihilism.

Overall, Stedman’s book is fantastic. If it sold like The God Delusion, then atheist and Christian dialogue would be much better off. Everywhere.

Don’t take my word for it, though. Read his book for yourself!

What do you think of Stedman’s approach to dialogue?