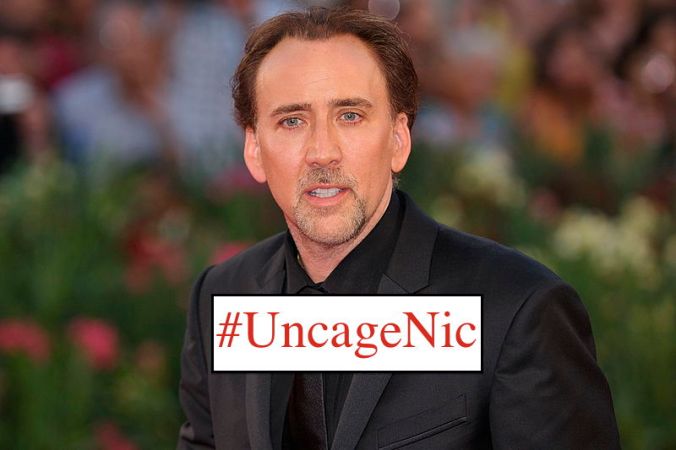 Read on for analysis of Left Behind‘s theology and—more important—its use of Nic Cage.

(First, if you missed it, check out my post about an epic Left Behind prank.)

Cage’s new movie is based on a series of wildly popular Christian novels, penned by Tim LaHaye and Jerry Jenkins between 1995 and 2007. The series spawned three Kirk Cameron movies. Three movies I’ve watched.

What about the theology behind the books and movies?

The new Left Behind movie generated many articles unpacking its theology. (You can also read a great, older take on the rapture by N.T. Wright here.)

Only have a few minutes to spare? I found a three minute video clip that will tell you everything you need to know. Watch Dr. Barbara Rossing, author of The Rapture Exposed, talk about the rapture’s recent and unbiblical origins.

There, that was a super quick and informative video! She does a great job explaining the rapture’s misguided theology and unfortunate consequences.

Fun fact: I emailed Dr. Rossing because I wanted to interview her for this post. After she didn’t respond, I felt like Nic Cage in Vampire’s Kiss.

Nic Cage to the Rescue?

Undeterred by this questionable theology, I was pumped for Nic Cage’s take on the rapture.

This seems like a recipe for awesomeness, right? An actor known for losing it in movies plays a survivor of the rapture.

I was expecting some of the finest Nic Cage freak-outs of his career, reminiscent of his most ridiculous movies: Deadfall, Vampire’s Kiss, and Bad Lieutenant. (Seriously, you need to watch these last two trailers.)

I thought Left Behind was going to offer us another uncaged emotional performance from Nic.

Nic Cage never really freaked out, at least not compared to his greatest hits. Consider the best moment, worst moment, and best Cage line from the film:

Best moment: the movie features one Muslim, and he is depicted in the best possible light. He’s not raptured and some people turn on him, but he’s presented as nothing but innocent and compassionate.

Worst moment: the film features a bizarre and insensitive portrayal of a Little Person. Don’t take my word for it, though. Read what Christianity Today wrote:

This film contains maybe the most offensive depiction of a Little Person that I’ve ever seen in any form of media; he is angry, short-tempered, thieving, accusatory, and generally a bad person, and the film strongly implies all this is predominately due to his stature. At the end of the film, he is punted down a slide like a football.

Best Nic Cage line: after the rapture, a woman runs up to Cage. She confesses that she’s very scared, and then she asks Cage if he is too. His reply is dynamite: “I will be — when I have time.”

Like the puppy in Billy Madison, this movie just lost its way. It never knew what it wanted to be. It wasn’t as campy as Snakes on a Plane, but it also wasn’t as preachy as Courageous or Fireproof. (I enjoyed all of these movies. #SorryNotSorry)

Instead, Left Behind plodded between these two poles. They should have ditched Cage for a Christian actor like Stephen Baldwin, or uncaged Nic’s wildest acting.

What do you think about Left Behind and Nic Cage?

7 thoughts on “The Real Problem with Left Behind: Not Enough Cage”